In today’s technological age when everybody is constantly on the move, mobile devices and mobile apps are a perfect tool to attract new users and to improve your business. It’s the right time to start utilizing the mobile market. You just have to choose proper technology for your development and React Native is a right way to go!

Native and cross-platform applications are two broad fractions of applications in the market. As we already know, you can write your native apps in Java or Kotlin for Android and in Objective-C or Swift for iOS. They allow you to take advantage of all the platform features, and everybody can say that the power of native is endless. Not only are the technical capabilities of native superior, but the documentation is too.

But there is a big BUT and an obvious disadvantage of native development. Key problem is that you have to two apps in parallel, one for iOS and one for android. This not only adds huge amount of additional coding work, but also introduces a problem of having duplicate teams. On the other hand, cross-platform applications are developed with a shared codebase.

One of the pioneers and most prominent cross-development frameworks is React Native. Some of the biggest companies in the world recognize React Native’s potential for business. What are the benefits? Is it the right solution for you? Is it better than the native development? We will try to explain it here.

React Native is a framework created by Facebook to enable cross-platform mobile development, enabling to develop fully functional apps on both platforms in less time and using just one coding language. It basically means that you don not have to create an iOS and android app separately. All you need is one codebase to develop beautiful apps for both platforms, without compromising on the UX and UI experience. What puts React Native above other similar frameworks, is that with it you can develop UI that is actually a native one. UI definitions are mapped to native components and your app logic is run by a javascript runtime on the mobile device. This is what gives your app a more native look and feel throughout and of course better performance.

Some companies and developers are constantly nagging about React Native and they mostly come from native background (potentially a competitiveness problem). But for somebody as us, who absolutely adore this framework, let us see what are the hurdles which are going to come on your development track. Here are the major issues critics have with the framework: 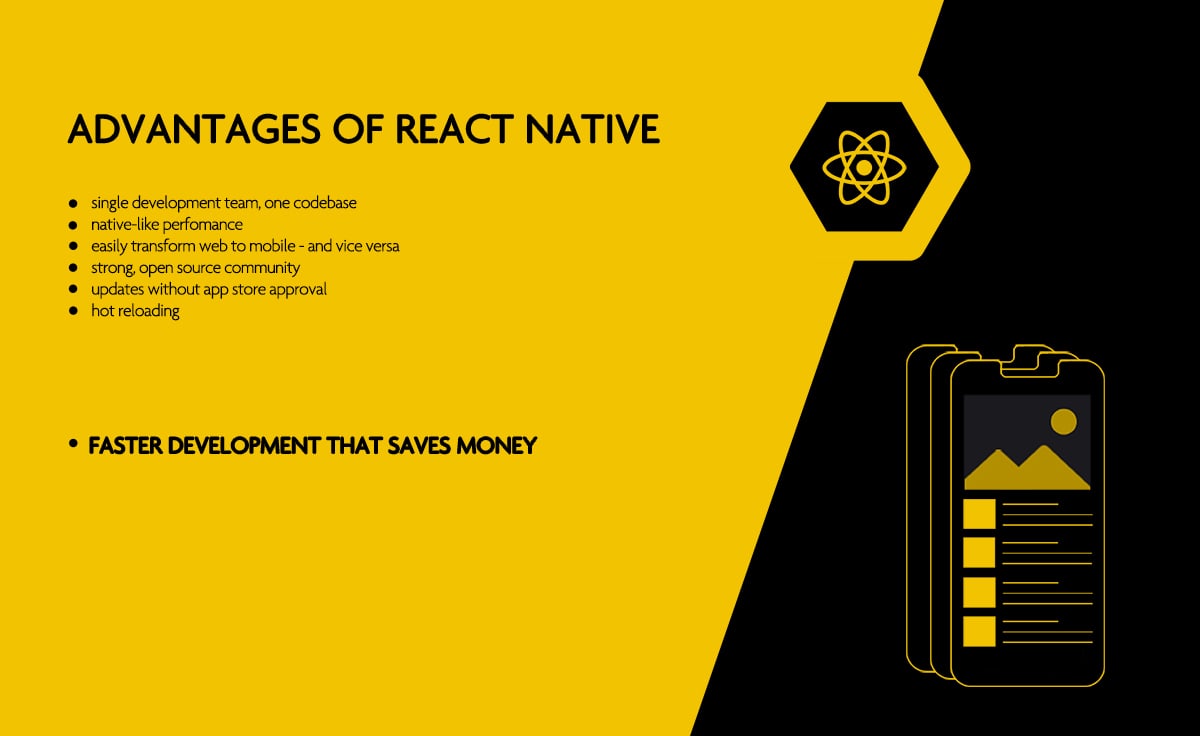 Why should you consider React Native in your business?

It is easy to make an ugly and slow native app also. All you have to do is work with inexperienced designers and developers. Luckily, as already mentioned, you don not have to compromise on UI while using React Native. Applications developed with React Native applications can have great look and feel like a real native app. Of course, a lot depends in the end on the abilities of the developers. You need the right partner to work with and that part will never change.

And what about the distribution on the market? React Native is everywhere, it is widely used by big brands. So if there are so many apps developed with this awesome framework, why you should not use it? Let us mention just some of them: Instagram, Netflix, UberEats, Walmart, Bloomberg, Wix etc. Impressed?

Final thoughts - save time, save money

Everybody knows that saving time in development process, you can save a ton of money. With everything mentioned in this article we can conclude that if you need to develop an app for both iOS and Android, React Native is the best tool out there. It can reduce the codebase by about 95%, saving you time and money. And not only that, React Native has a number of open-source libraries and components which can help you further speed up the development process.

How to make a final decision? In fact, there is not much to be added, as it seems to be very obvious. If you are a big company, you are developing a complex game or you can afford two different developers and a designer at the same time - go native. Other go with React Native, your business will be real happy with the it.

You are in a need for a mobile application and still having some doubts whether React Native is right for you? Feel free to contact us at info@nordit.co, we can help you figure out the best solution based on your business and requirements ;)

Let's discuss your idea. We might build your app for free.

Do you have questions or are you interested in talking about your project? We will take the time to learn about your company, how you work, and what exactly you are looking for. Just fill out the form and we will get back to you soon.

This website uses cookies to enhance your experience. We assume you are ok with this, but you can turn it off if you want.
OK
Terms&policy